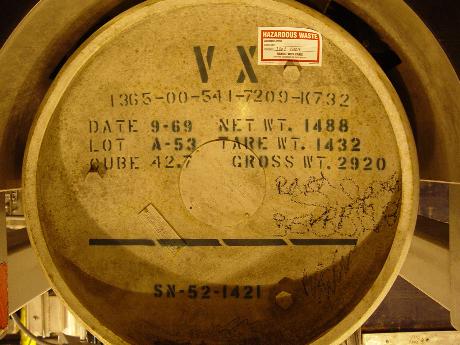 Toxicology has been front and center in the media recently with the high-profile assassination of Kim Jong-nam ( the estranged half-brother of North Korean Supreme Leader Kim Jong-un, at the airport in Kuala Lumpur. Preliminary reports from the Malaysian government suggest that VX nerve agent was the murder weapon. VX is a weaponized version of a class of pesticides called organophosphates (OPs). These agents disrupt the function of the autonomic nervous system.

The auto what? That doesn’t sound very exciting…

It isn’t, but that’s the point. The autonomic nervous system governs vital functions such as blood pressure, heart rate, temperature regulation, and digestion, and it does its job without us having to think much about it. When VX comes along, however, it totally mucks with one of the system’s key neurotransmitter chemicals, acetylcholine.

OK, that’s more interesting. But why is VX bad?

VX binds to and irreversibly inactivates an enzyme called acetylcholinesterase (AChE). AChE breaks down acetylcholine, making sure that acetylcholine is present in appropriate amounts – not too much, not too little. By inactivating AChE, you get a massive buildup of acetylcholine, which sends the organs that receive acetylcholine nerve signals into overdrive.

The first symptom might be some sweating and muscle twitching. Then some runny nose or tearing and shortness of breath, which progresses to vomiting and diarrhea. Basically, acetylcholine makes organs produce LOTS of extra secretions (think mucus, tears, saliva, gastric juices, sweat…). It makes air passages spasm and fill up with mucus – think body fluids pouring out of every orifice. Muscles become paralyzed, and VX-poisoned patients start to drown in their own secretions and develop seizures, slip into a coma, and then die.

Wait, I think I remember VX… like in that awesome 90s movie, The Rock?!?

Kinda. VX was the weapon that the bad guys stockpiled on Alcatraz in that classic movie. If you haven’t watched it (recently), you should probably go watch it now. Now that you’ve (re-)watched it, you know that Nicholas Cage and Sean Connery were trying to stop the bad guys from releasing the VX over San Francisco and killing millions of civilians. They went a little Hollywood with it (in real life, faces don’t melt off), but the writers had the right idea.

Whoa, so people could really use nerve agents for terrorism?

Unfortunately, yes. But there are differences between the various agents. The “V” series nerve agents are not very volatile, meaning they don’t evaporate very easily. Therefore, the primary method of exposure to VX is through skin contact. There are other OP nerve agents, such as Sarin which has been used in terrorist attacks and against civilians (e.g., Tokyo subway 1995; Ghouta, Syria 2013)

Nope. It was classified as a weapon of mass destruction by UN Resolution 687, and the Chemical Weapons Convention of 1993 made production and stockpiling of VX illegal. That apparently doesn’t stop these assassins though…

VX belongs to a group of chemical nerve agents known as the “V agents”. Other members of this group are VE, VG (AKA tetram), and VM.

There are other groups of nerve agents that act similarly, and they are separated from one another by their volatility (or their ability to be liquids at room temperature). The “G series” is made up of sarin, soman, tabun, and cyclosarin. The GV series contains the deadly “Novichok Agents” and GV.

Why did anyone make VX in the first place?

VX was discovered in 1952 by a company in Great Britain. They were actually looking to develop pesticides, and while VX is a very effective pesticide, it is also incredibly dangerous to humans.

If I get exposed, do I have to stab myself in the heart, a la Nicholas Cage?

Absolutely (just kidding). The antidote consists of 2 medicines, atropine and pralidoxime, which can be injected into either a vein or a muscle. Atropine binds to the same target as acetylcholine in the nervous system, and prevents the built-up acetylcholine from putting organ systems into overdrive. The goal of its use is to dry up secretions in the airway so poisoned patients don’t suffocate on their secretions or develop seizures. Pralidoxime, if given early in nerve agent poisoning, pushes VX and other OPs off of AChE, reviving the enzyme and allowing it to work again. Time is key though – if you wait too long, OPs bind so tightly to AChE is broken until your body can regenerate it (which takes weeks).

The Poison Review description of VX and the assassination

CNN description of the assassination

What is Sassafras?
The Other Risk of Storms: Carbon Monoxide Poisoning